James Palmer is the first Mayor of Cambridgeshire and Peterborough, elected as the Conservative candidate on 4 May, 2017.

Palmer was born and raised in Soham, attending  St Andrews Church of England School and Soham Village College before studying at the Cambridgeshire College of Agriculture and Horticulture. He then worked for and ran the family dairy business, H Palmer and Sons.

As leader of East Cambridgeshire District Council, he helped secure the funding for the Ely southern bypass to alleviate congestion in the city. Under his leadership the council also developed plans for £13.5 million leisure centre and a cinema complex for Ely. He also championed community land trusts as an innovative way to deliver affordable rental homes for working people whose circumstances meant they did not qualify for social housing, but were struggling to afford high private rents.

His Plan for Cambridgeshire

I have lived and worked in Cambridgeshire all my life. I understand both its people and the local economy. I have run and expanded my own agricultural and dairy businesses.

I entered local politics in 2007 and, as leader of East Cambs, I made it my mission to create a more business-like and business-friendly council. Business growth in my area was 12% last year.

I know there is a need for more affordable housing for local people. In East Cambs, under my leadership, we have developed a scheme that has allowed us to build homes specifically for lower paid, hard-working local people.

As Mayor I will do the same across Cambridgeshire and Peterborough.

I understand the effects of immigration on our communities as well as the need for transient labour in a strong economy.

I reformed the council I lead, cutting bureaucracy to save £700,000 per year in running costs while improving service delivery AND freezing council tax for three years – with no further increase for the coming year.  And all this while our government support grant was being cut.

I have battled against delays and bureaucracy to get new roads, homes and leisure facilities built – often against the odds. I know what works, what doesn’t and how to improve things quickly.

As a County Councillor I know the challenges facing Hunts, Fenland and Peterborough.

–  I wholeheartedly believe Wisbech needs a rail link and Peterborough a university.

–  I know we need to sort Cambridge’s congestion problem with new, forward-thinking and innovative solutions.

I have championed devolution from day one because it is our one chance to build a bright future for Cambridgeshire and Peterborough on our own terms.

As your Mayor I will continue to get the job done.

A Mayor for you 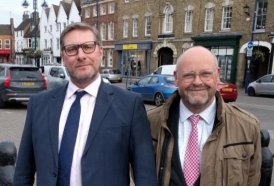 If there is an issue that you would like to raise with James, please feel welcome to use the following contact details;