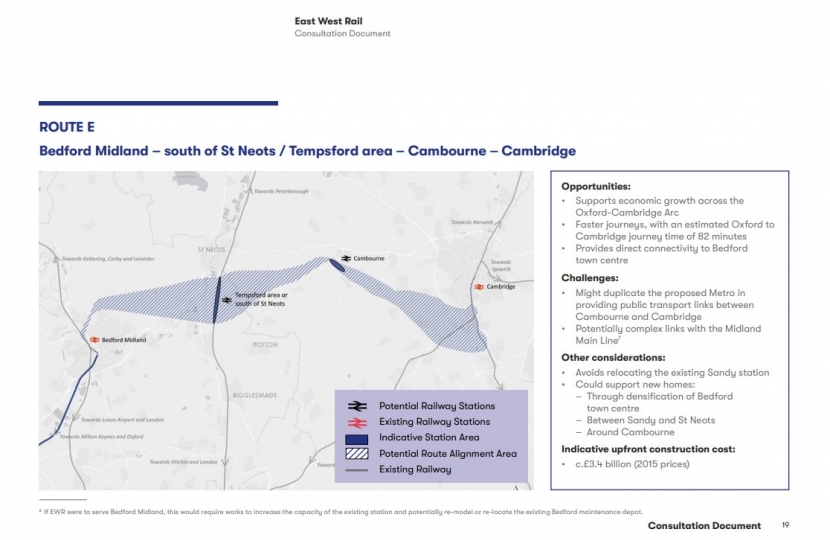 East West Railway Company has today announced the decision for the proposed route of the brand-new investment in Oxford to Cambridge public transport, choosing Route E, out of the five routes shortlisted in prospective plans.

The chosen route, which was collectively championed as the best option by Huntingdonshire District Council (HDC), Bedford Borough Council, South Cambridgeshire District Council and Cambridge City Council, includes the building of infrastructure and a new station just south of St Neots. The resulting decision comes off the back of the strong collaborative work across all four councils to provide East West Rail with the context and data to make this decision that results in the greatest future success and ambition of our district.

Executive Leader of the Council, Councillor Ryan Fuller, said: “This decision has been long in the making and we are delighted that East West Rail has chosen Route E which brings the potential for greater prosperity to all parts of  Huntingdonshire, a choice that is best suited to our residents and businesses. We worked tirelessly with our neighbouring councils to make the economic opportunity case for Route E, with its new station to be positioned to the south of St Neots providing exceptional transport links across the OxCam Arc and beyond, in conjunction with improvement works to both the A14 and A428.

“The chosen route also makes maximum use of existing infrastructure corridors, meaning that the impact on our precious countryside will be limited. Huntingdonshire is in an area of high economic growth, the news of this investment in major infrastructure is one key project that will help to support our existing communities and businesses with planned and future growth.”

The East West Rail project is one predicated on the connection of Oxford to Cambridgeshire via a direct line, to nurture growth and prosperity throughout the OxCam Arc. In doing so, there is widespread opportunity for infrastructure development within the connected areas and improvements to local public transport services.

The route that has been chosen (Route E), travels from Bedford Midland station to Cambridge including two new stations, one to be constructed in Cambourne and one to the south of St Neots.