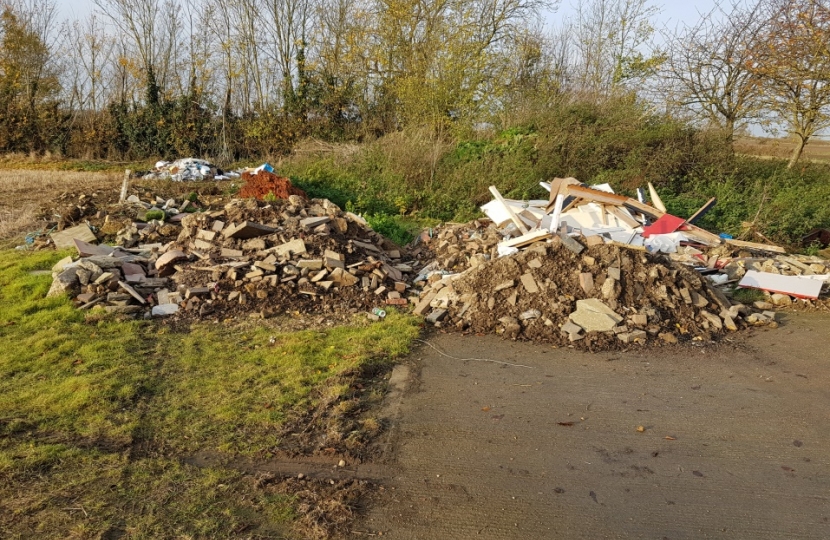 On 23 May 2019, Mr Michael Rooney, the proprietor of MR Contractors was found guilty of fly-tipping offences in a prosecution brought by Huntingdonshire District Council.

Following an extensive investigation by officers from the Community Protection and Enforcement Team, five charges of illegally depositing waste were brought against Mr Rooney. The court heard that MR Contractors carried out waste removal from an address in St Ives from September through to November 2017. These fly tips were deposited in Houghton and Hemingford Abbots and amounted to approximately 15 tonnes of waste (the equivalent of eight tipper loads) that were dumped on the highway and private farmland.

Mr Rooney claimed that he had given cash to two employees of MR Contractors with the instruction that they take the waste to the waste disposal facility. He stated that they chose to ignore these instructions, pocketed the money and dumped the waste illegally.

The court acknowledged that Mr Rooney did not personally carry out the fly-tipping but that his duty of care to prevent others from fly-tipping had not been fulfilled. This was due to his lack of enquiries with his employees and not obtaining any waste transfer notes or receipts from the cash he had given them. Mr Rooney stated that he had simply trusted them and that his recording systems were not adequate and entered a guilty plea for the five charges brought against him.

Chris Stopford, Head of Community said: "This prosecution highlights that fly-tipping will not be tolerated. The council remains committed to tackling this environmental crime to help keep Huntingdonshire a pleasant place to live."

The District Judge said: "I am sure that you are aware as any of us who drive around these areas  that fly-tipping is a blight and it looks bad, untidy, and it is dangerous as there are risks associated with infestation and it is far too prevalent. Whilst it is accepted that you were not the person who deposited all this waste, as someone who runs a business involved in waste transfer, you ignored or had not taken notice of procedures that could prevent those things happening."

"I am going to deal with this with financial penalties on one of five offences and no separate penalty on the other four so essentially I am saying that in imposing the fine on the one I take into account the other four. I am bound to take into account your finances, the information is far from ideal, whether that goes in your favour or not, something to think about in the future is that you should be keeping proper records."

The council takes reports of fly-tipping very seriously, and this successful prosecution should send a strong message to residents that offences of this kind will not be tolerated in the district.