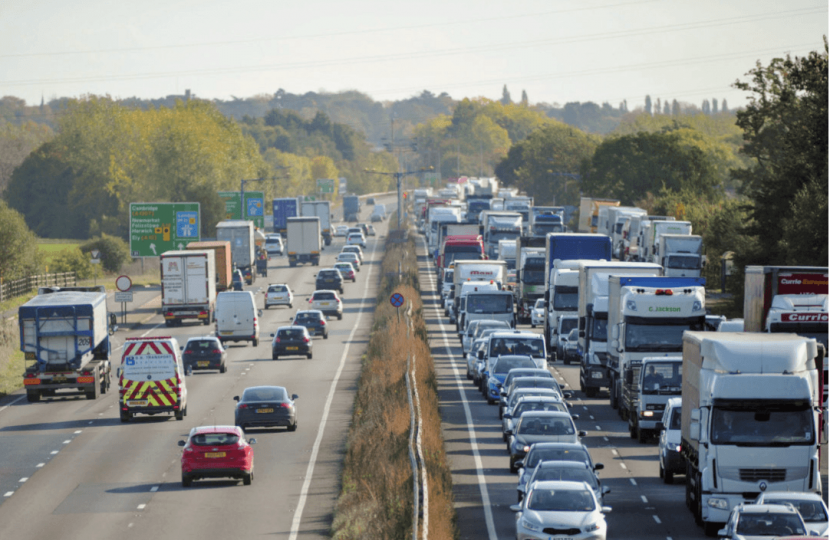 An announcement by Highways England on the preferred route of the A428 Black Cat to Caxton Gibbet scheme has been welcomed by Conservatives across Huntingdonshire.

Highways England says tens of thousands of drivers who use the A1, A421 and the A428 could benefit from the new 10-mile dual carriageway that will stretch from the Black Cat junction to the Caxton Gibbet roundabout.The existing A428 will become a local road which will serve the communities between St Neots and Caxton Gibbet.

The proposed new route, known as Option C, includes a three-tier junction at the Black Cat roundabout to allow traffic to flow freely on the A1, A421 and the new road.  It also includes improvements to the A428/B1040 Eltisley junction, and there will be improved routes for cyclists, walkers and horse riders.

The announcement further calls attention to Conservative efforts to ensure real improvement our area, delivering on a District Council Manifesto promise to continue working on the A428 Upgrade and transform Huntingdonshire. As our local MP, Jonathan Djanogly also continues to push the Government to prioritise solving congestion on the road, while chairing the A428/A421 Alliance to champion improvements to the A428.

Cllr Ryan Fuller, Executive Councillor for Housing, Planning and Economic Development at Huntingdonshire District Council welcomed the news, saying: "Following proactive engagement from councillors, MPs and officers, the council is absolutely delighted that long awaited improvements to the A428 have finally been confirmed. This new route, which was broadly the council’s preference amongst the options, will begin to redress existing deficiencies in the road network. Critically, it will begin to reduce constraints to both local and wider cross country journeys, and give much greater certainty about the ability to move around within our district efficiently and effectively.

"Improved certainty in journey times will aid business confidence for future investment in employment opportunities, and help existing and future residents make more informed choices around the ability to live and work successfully across Huntingdonshire. Mitigation can be provided in terms of matters such as noise and air quality in order to protect St Neots now, and as part of planned growth which is a key consideration for this council. Coming alongside the current East West Rail consultation, these are all exciting announcements that increasingly demonstrate that Huntingdonshire is a strong and sustainable place for growth, providing great future economic benefits for our communities."

Jonathan Djanogly, Member of Parliament for Huntingdon and Chairman of the A428/A421 Alliance, also welcomed the news and called for no further delays in the process, saying:

“An improved A428 is vital to unlocking growth in this area and assisting businesses in the Eastern region between Cambridge and Bedford. This road has long been an imperative issue for Cambridgeshire, Bedford, Central Bedfordshire and Milton Keynes as the improvements are required to ensure that this route can function more effectively as a strategic east-west link and support the housing and jobs growth planned along the corridor.”

“I am delighted that Highways England has selected the preferred Orange route, which was supported by 83% of consultation respondents and best serves my constituents, and also that a fully grade-separated junction is proposed at Black Cat roundabout. Today's announcement is excellent news for my constituents in Huntingdonshire and for the East of England. The A428 upgrade will improve commuting times, reduce congestion and provide the infrastructure necessary to develop our local and regional businesses and indeed our prosperity moving forwards. Local MPs and councils have all put a great deal of work into leading a strong campaign for an improved A428 and I am pleased to see a successful outcome of that sustained effort.”

“However, this announcement is long overdue and many of my constituents continue to suffer congested journeys and rat-running through local villages as a result of the existing issues. With construction work due to begin in 2021/22 I shall therefore continue to press all concerned to ensure that the timetable does not slip any further.”